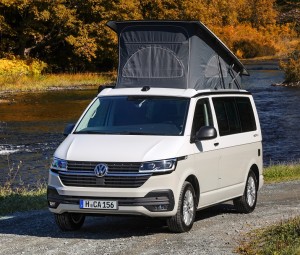 The new Volkswagen California 6.1 Beach is now open for contract hire orders and is an impressive offering.

With campervanning in the UK growing quickly in popularity, the new Volkswagen California 6.1 Beach has been unveiled at a good time.

VW van centres are now taking orders for the new model which has two variants, the Camper and the Tour.

Prices start from £52,062 and VW says that the new Beach model makes their popular campervan more accessible to those who have larger families.

It will also provide a flexible multipurpose vehicle (MPV) for those who want to enjoy a hobby, or have a quality vehicle for occasional rest stops while travelling.

The new VW California 6.1 Beach Tour has five seats as standard but there’s the option to increase these to six or seven seats.

The 6.1 Beach Camper has four seats as standard, with the option to add an extra seat plus there’s a pull-out awning, and a mini kitchen with a single gas hob.

The first deliveries of the new model will arrive by March and they are powered by a 2.0-litre TDI diesel engine.

This engine produces 150 PS and has a seven-speed automatic DSG gearbox to deliver the power effectively.

Both the Camper and Tour models feature a manual pop-up roof, a camping table with two folding chairs and there’s a DAB radio with smartphone connection. 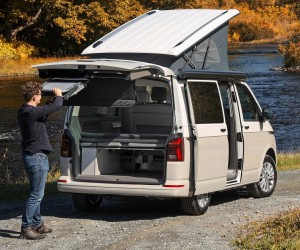 The latest VW California campervan also features a 10.25-inch digital instrument that is easy-to-use and adjust.

There’s also easy controls for various items within the campervan by using a digital display, to control the lights and the heating.

The new infotainment system also features an integrated Sim card as standard to open up a range of online based services and functions.

Among these is the use of Volkswagen’s eCall accident system which will contact the emergency services should the vehicle be involved in an accident.

The system will also send the camper van’s location as well.

Also, some potential drivers thinking of leasing a VW California campervan may worry about driving such a large vehicle.

It’s an easy vehicle to drive with lots of safety equipment fitted, including city emergency braking which will warn the driver of an impending collision and then apply the brakes if necessary.

The van can also detect potential issues with pedestrians and cyclists.

Another useful addition is the appearance of driver steering recommendation so the steering system may step in to help should it recognise that the driver has oversteered when cornering, for example.