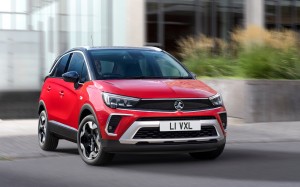 The new Vauxhall Crossland will be available later this year, but the carmaker has given a preview of its new SUV offering now.

These are the first official pictures of the facelifted Vauxhall Crossland and there’s a bold new look to enjoy.

The new front-end features a gloss black radiator grille, and a new vented front bumper, and the firm is dropping the ‘X’ suffix from the name.

Handling has also been boosted with new dampers and springs, and the steering system has been designed to deliver a more rewarding drive with better feedback.

While prices have still to be confirmed, the Crossland will offer a great car leasing opportunity for those who want a good-looking and well-equipped compact SUV.

The SUV features the firm’s new Vizor design, which we have already seen on the all-new Vauxhall Mokka.

The new Crossland is available with a range of efficient diesel and petrol engines, including a 1.2-litre turbocharged petrol with two power outputs of 83 PS or 130 PS.

The engines have either a six-speed manual gearbox, or six-speed automatic transmission for the more powerful units.

Fuel economy will range from 48 to 52 mpg for the petrol engines, while the diesel engine will return around 64 mpg.

There’s also a new high-gloss black tailgate at the rear, along with dark tinted taillights.

These give the Crossland a much wider stance, and Vauxhall is also adding new rear and front skid plates.

Drivers also get a choice of new 16- or 17-inch wheels while the sporty Crossland SRi model will come with 17-inch alloys with a black roof and red window accents.

Interior features include an 8-inch touchscreen that is smartphone compatible, and there are ergonomic seats for support and comfort.

The rear sliding seats offer a practical 60:40 split, and the boot has been increased to 520-litres. With rear seats folded flat, this increases to 1,255-litres.

As should be expected, the new Vauxhall Crossland features the latest safety kit including forward collision alert and there’s automatic emergency braking with pedestrian recognition.

The Crossland will also have a panoramic rear view camera that has a 180° view, along with driver drowsiness alert.

The new Vauxhall Crossland compact SUV will be available to order later this year, and the first deliveries will begin early in 2021.