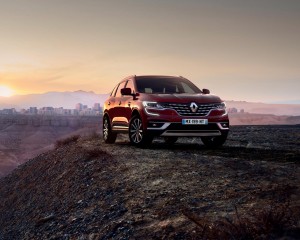 The new Renault Koleos offers new engines and improved styling as well as a boost in safety features.

The Renault Koleos has been revamped offering more refinement and new engines.

The new model was unveiled at the Shanghai motor show and it’s priced from £28,195 OTR with deliveries starting in November.

It’s been a popular compact SUV for drivers and Renault is clearly building on its success with sharper styling and the more powerful engines.

Along with improved refinement levels, the carmaker has also enhanced the car’s safety features.

The 1.7 litre Blue dCi 150 is offered in the model with front wheel drive only but there’s a larger, more powerful 2.0 litre engine producing 190 HP that is mated with the firm’s 4×4 i-system; it’s this that gives the Koleos its off-road capabilities and improved handling.

Both engines are also coupled with the firm’s continuously variable transmission (CVT) to deliver the best levels of performance. 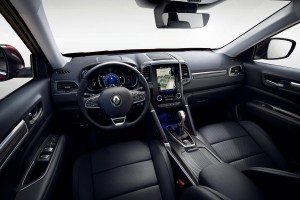 Along with the new engines, the new Renault Koleos has better driving dynamics and subtle exterior styling changes.

There are new paint colours to choose from as well as extra side trims and it’s still an impressive vehicle to drive.

The interior has a premium feel with lots of new soft-touch materials and more space for rear seat passengers.

Among the safety kit is the introduction of active emergency braking system to help detect pedestrians and cyclists plus blind spot warning and traffic sign recognition systems.

There are just two trims to choose from to make life easier for drivers with either of the new diesel units.

The standard equipment includes a 7-inch touchscreen with satnav plus smartphone connectivity and there’s also rear and front parking sensors and a reversing camera.

The new Renault Koleos is an impressive offering and is entering a competitive segment with a lot of equipment to offer and a comfortable drive too.