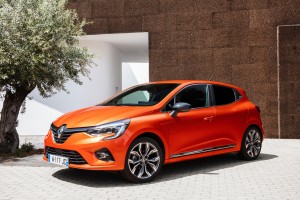 A new fifth-generation Renault Clio is heading to the UK.

It claims to be the bestselling French car ever made and there’s a new fifth-generation Renault Clio heading to our shores.

Along with a new exterior style, the interior has also been thoroughly refreshed.

Among the features is a new 9.3-inch touchscreen infotainment system plus a 10-inch instrument cluster as part of the car’s SmartCockpit.

Engines for the Renault Clio

There will be two petrol and one diesel engine for the Renault Clio from launch with the entry-level model TCe 100 being mated to a five-speed manual box. However, from November the firm’s seven-speed CVT gearbox will be available as an option.

The diesel unit is mated to a six-speed manual gearbox and should return around 79 mpg.

It helps too that the 1.5 litre engine will develop torque of 220Nm to help deliver nice levels of performance.

There’s also a more powerful three-cylinder petrol engine available from October and from the middle of next year, Renault promises a new generation of hybrid for the Clio.

That’s when drivers will be able to enjoy a 1.6 litre petrol engine and a pair of electric motors that are powered by a 1.2 kWh lithium ion battery. 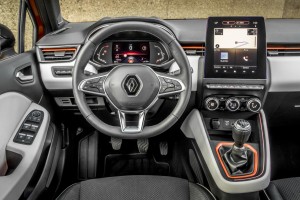 The Renault Clio also offers customisation, so various colours can be chosen for the interior dashboard and centre console along with ambient lighting offering eight different colour choices.

Also, despite being shorter and lower than the car it replaces, the new Clio offers more space on board as well as comfort.

The boot size is now the best in class at 391 litres and there’s another 26 litres of storage dotted around the cabin.

There’s also plenty of equipment on board with adaptive cruise control with lane keeping assist.

Other equipment includes traffic sign recognition featuring a speed alert and active emergency braking should a pedestrian or cyclist be detected in the Clio’s path.

There’s no doubt that the Renault Clio has been a popular choice in the UK for many years and the latest incarnation is a well-priced and well-equipped offering.