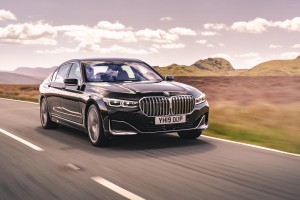 The new BMW 7 Series is an impressive offering with luxurious features.

However, the new model has more technological advancements than the car it replaces and better levels of handling and comfort.

BMW has also revamped the exterior and the cabin design with the 7 Series being offered in long wheelbase and standard body variants.

Engines for the new BMW 7 Series

The engines for the new BMW 7 Series feature a new six-, eight- and 12-cylinder units plus a plug-in hybrid system. The electric-only range for the petrol-electric hybrid is 36 miles.

The petrol and diesel engines are mated to an eight-speed Steptronic transmission and the XDrive all-wheel drive system is also an option.

All of the engines deliver impressive levels of performance with the BMW 745e sprinting from 0 to 62 mph in 5.2 seconds. The 750i will complete the same sprint in an astonishing four seconds. (The BMW M760Li xDrive is even quicker). 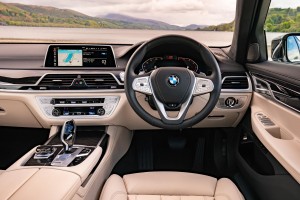 The BMW 7 Series’ interior has an impressive new design with smartphone wireless charging and a hands-free phone system fitted as standard.

BMW has also added ambient lighting, there’s a choice of six colours and an excellent sound system. For those in the rear seats, there is an entertainment system incorporating two 10-inch HD displays that have a Blu-ray player.

There’s also the firm’s ‘Touch Command’ unit so the car’s comfort functions can be operated easily by using a removable 7-inch tablet – so anybody in the vehicle can use it.

The new model is 5cm taller than the previous version and features the traditional BMW kidney grille which includes an active airflow control.

There are also air breathers that help to optimise airflow through the 7 Series’ wheel arches and reduces turbulence which most drivers will appreciate at high speeds.

As should be expected, there’s a lot of standard safety and assistance equipment including non-dazzling high beam assist, adaptive suspension and automatic self-levelling air suspension.

The new BMW 7 Series is an excellent offering for those who want luxurious features and comfortable driving over long distances – and to make an impression in the car they drive.