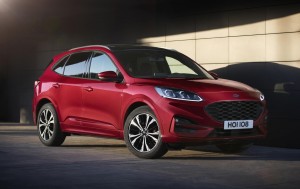 The all-new Ford Kuga has been unveiled with a distinctive style a lot of space on board.

This is the impressive all-new Ford Kuga and the line-up includes a range of hybrid powertrains.

There is more space on board the new sleek design, plus new driver assistance systems to deliver a comfortable and rewarding drive.

It’s also the most electrifying Ford model ever made, and it’s the first from the Blue Oval to offer mild-, full- and plug-in hybrid choices. Ford says all of its new launches will now feature an electrified choice.

Depending on the model, the plug-in hybrid Kuga will, for example, offer an electric driving range of 31 miles to deliver fuel efficiency of 235 mpg and emissions of 29g/km.

Engines for the Ford Kuga

Alongside the hybrid powertrains, the engines for the Ford Kuga include the firm’s excellent 1.5 litre EcoBoost petrol engine and 1.5 and 2.0 litre EcoBlue diesel choices.

The petrol units offer outputs of 120 PS or 150 PS with fuel economy of around 42 mpg. The economy is helped by a cylinder deactivation system for the petrol engine’s three cylinders.

Equipment for the new Ford Kuga 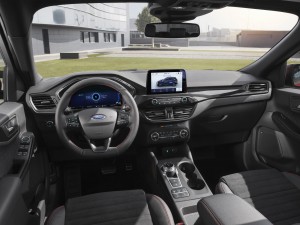 Potential owners have a range of variants to choose from including the Titanium, ST-Line and Vignale to deliver the unique character that SUV drivers are looking for.

The Ford Kuga is an impressive offering and it’s the firm’s bestselling SUV model in Europe and its third most popular model after the Fiesta and Focus.

There’s a lot to like about the car and it will help build on the sales increase that Ford saw for it last year.

One of the big differences is that the new model is much larger than its predecessor to deliver extra space in the cabin and the interior has been well-designed with premium materials that combine to make an impressive offering.

Along with driver assistance features, there’s lots of comfort in the new Ford Kuga which is an easy car to live with.