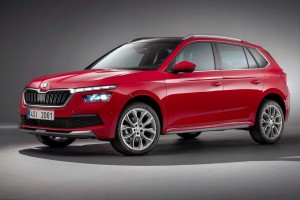 The Skoda Kamiq is the latest addition to the car manufacturer’s SUV line-up and it’s an impressive creation.

This is the impressive new Skoda Kamiq which is the third SUV being produced by the carmaker.

The name means ‘something that fits perfectly’ in the Inuit language and there’s a lot to like about this new sport utility vehicle.

For instance, there is a higher ground clearance and with a comfortable seating position it delivers the agility that is usually found in a compact car.

There’s also plenty of equipment on board, including an impressive infotainment system and various clever features that the carmaker is renowned for delivering.

Engines for the new Skoda Kamiq

There will be four engines for the new Skoda Kamiq which come with brake energy recovery and stop-start technology.

The diesel models also comply with the strict Euro 6d emissions and the entry level engine is the 1.0 litre TSI unit that will produce 95 PS.

The three-cylinder model is mated to a five-speed gearbox and offers punchy performance. There’s also a six-speed gearbox for the 1.0 litre engine producing 115 PS along with the option of a seven-speed DSG.

The best performing engine is the 1.5 litre TSI with four-cylinders producing 150 PS and torque of 250 Nm.

This model also features active cylinder technology, so when there’s a light load the engine will automatically close down two cylinders to save fuel. 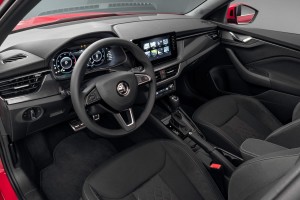 There’s also a raft of state-of-the-art driver assistance systems for the Skoda Kamiq, including lane assist and front assist as standard.

Another option is a driver alert fatigue system which will sound an alert should the driver’s concentration begin to wander.

Another safety option is the ‘proactive crew protect’ which will pretension the front seat belts and close any windows that are open when the sensors in the Kamiq detect that a collision is imminent.

The new Kamiq also features impressive infotainment systems that are new for the range, including a top level sound system with a freestanding 12.1-inch touchscreen.

There’s also a virtual cockpit utilising a 10.25-inch screen with five different displays; the entry-level model has an 8-inch display and an impressive sound system.

There’s also a high degree of connectivity in the new car with connection to a web portal or various apps.

Again, there’s a good range of clever features and it’s the first car in the segment offering door edge protection that will automatically deploy when the doors are opened.

The new Skoda Kamiq is an impressive addition to the firm’s line-up and there’s a lot to recommend it, including high comfort levels, low running costs and it’s a great vehicle to drive.