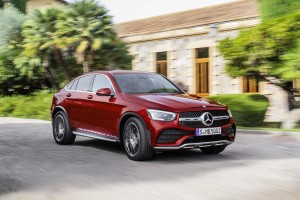 The new Mercedes GLC Coupe is set to attract lots of attention following in the footsteps of the new GLC SUV.

The new vehicle manages to combine the functionality of an SUV with a coupe’s sportiness.

The exterior styling has also been enhanced, particularly at the rear end and there’s an impressive multimedia system on board too.

There’s also a new engine line-up for the Mercedes GLC Coupe and the carmaker says other engines will be added during the course of 2019 to the line-up.

The diesel models will meet Euro 6d requirements which will come into force next year. Mercedes has achieved this by installing a system that treats the exhaust gas more effectively.

The petrol hybrid engines are also impressive, with the electrification side utilising an on-board 48 volt electrical system.

The hybrid is boosted by a belt-driven starter generator which also aids energy recuperation which will boost fuel savings. 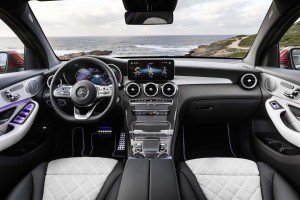 However, it’s the enhanced driving assistance systems for the Mercedes GLC Coupe that will probably attract the most attention.

The features that have been expanded or added include an exit warning function, a warning when approaching the tail end of a traffic jam and there’s also a new trailer manoeuvring system -a boon when reversing with a trailer.

There’s also a 360° camera offering all-round visibility and an enhanced image on the driver’s display.

Mercedes is also offering the option of their energising comfort control system so the optimum environment can be selected using the in-vehicle system to boost the music and lighting moods as well as climate control and seat massage function.

The driver can also alter the ventilation and heating for the seats and select suitable music for their drive.

As should be expected, the Mercedes GLC Coupe will offer excellent handling with an improved sports suspension and adaptive damping.

For those who want to be more adventurous with their GLC Coupe, then there are rear and front underride guards to underline its SUV origin.

Not many drivers will be going off tarmac but the GLC Coupe is a renowned performer, with excellent engines, impressive grip and handling, so it’s likely to be a popular choice.

The actual launch date for the Mercedes GLC Coupe and prices will be unveiled nearer the time.