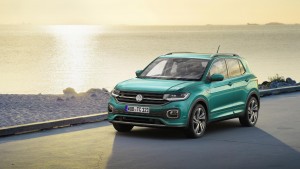 The impressive Volkswagen T-Cross has been given a world premiere as the car firm expands its line-up of SUV’s.

This is the excellent Volkswagen T-Cross which joins the German carmaker’s line-up of SUV’s and offers a practical and versatile alternative in a competitive segment.

The urban crossover had its world premiere on three continents and it’s the first small SUV that VW has made.

The new model is more compact than the Tiguan with an overall length of 4.11 metres and there’s plenty of space on board for five people.

It helps too that the rear seat can slide forwards to boost luggage space or legroom.

The boot is between 385 litres and 455 litres with the rear seats folding fully down to extend the flat loading space to 1,281 litres.

The new Volkswagen T-Cross has four turbocharged engines consisting of one diesel and three petrol units.

For those who need economy, the 1.6 litre TDI  produces 95 PS from four cylinders and economy of around 60 mpg.

The smaller petrol engines also come with a petrol particle filter and all offer good performance around town and on motorways.

Lots of equipment for the Volkswagen T-Cross

There’s lots of equipment for the Volkswagen T-Cross including driver assistance systems which are usually found on more expensive models.

There are excellent crash characteristics to protect the occupants and as well as reducing the risk of collision, the T-Cross delivers lots in driver comfort.

As with all new cars, there’s a high level of connectivity and networking with smartphones being charged inductively and four USB ports for digital needs.

The new car will be manufactured in Spain and VW says it is investing more than €1 billion over the next year to help deliver productivity to meet growing demand for compact SUV’s.

The latest new car joins the recent additions of the Tiguan, the Tiguan Allspace and the impressive VW T-Roc.

The firm is also planning the next model revamps including the firm’s first all-electric SUV, the Id.Crozz, so there will be a model to meet every SUV need.

The new VW T-Cross will go on sale early next year, with prices and more details available then.