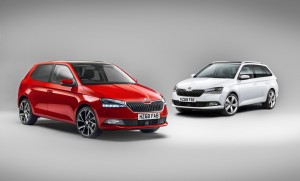 The order books have opened for the facelifted Skoda Fabia, with deliveries set for September.

This excellent small car has a striking new appearance and higher levels of equipment with five trim grades available along with hatchback and estate variants and four engine choices.

Engines for the Skoda Fabia

The engines for the Skoda Fabia include a refreshed, three cylinder petrol engine range with various outputs from 60 PS to 110 PS.

Two of the engines have indirect injection while the two of the TSI units have advanced engineering featuring direct petrol injection and turbocharging.

The TSI engines also have petrol particular filters added and the more powerful engines have the option of a seven speed DSG gearbox.

The Skoda Fabia supermini also has lots of equipment – one of its attractive features – including LED daytime running lights and a multifunction trip computer.

The entry level model features alloy wheels, electric windows and other models come with satnav, an infotainment system and a centre console that lights up.

Further up the range, features include climate control air conditioning, new seat upholstery and LED rear lights. There are also various styling options, including a black roof and a carbon-effect dashboard trim for the Monte Carlo model.

Other options include larger alloy wheels for the hatchback, rear traffic alert and blind spot detection.

As usual, the Fabia also features several clever ideas, including an ice scraper that is hidden in the fuel filler cap and there’s also a gauge to help measure the tyre tread depth.

The new styling tweaks include a revised grille and bonnet combination, so the car has a sleeker appearance with narrower headlights.

Since it was first introduced nearly 20 years ago, Skoda have shifted more than 4 million units, and the third generation was launched four years ago and has sold around 500,000 models since.

The Skoda Fabia is the firm’s top seller across Europe and the second biggest seller of its range in the UK.