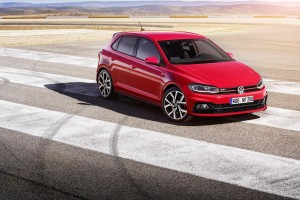 The new Volkswagen Polo will impress – especially the GTi.

This is the new sixth generation Volkswagen Polo with the supermini set to be another big sales success for the carmaker.

For the first time, it’s only available in five door guise and the Polo, the firm says, will showcase the segment’s best for space, technology as well as comfort.

There will be seven models available in the line-up including a 200 PS GTi and the VW Polo GTI+.

The Polo has racked up more than 14 million sales since it was launched and the new model’s trim levels deliver lots of equipment.

Engines for the Volkswagen Polo

The engines for the Volkswagen Polo consist of a range of petrol TSI and turbodiesel TDI units and from next year will include the firm’s new 1.5 litre TSI petrol unit which comes with active cylinder technology and will deactivate two cylinders to boost fuel economy.

The engine range also sees a 1.0 litre MPI unit delivering producing 65 PS with the most powerful unit being the 2.0 litre TSI producing 200 PS.

All models will have stop/start and regenerative braking while the larger engines have a choice of automatic six or seven speed DFG transmission.

Equipment for the Volkswagen Polo 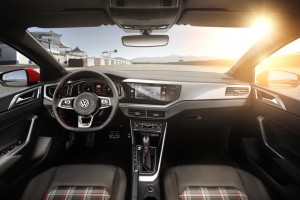 Among the equipment for the Volkswagen Polo are air conditioning, an 8-inch infotainment screen with DAB radio, automatic headlamp activation with daytime running lights and front assist with pedestrian monitoring.

The range topper is the Polo GTi+ which features tinted windows, a ‘light and sight’ pack, adaptive cruise control and keyless entry. VW says it is also adding a ‘stop and go’ function which is a first for a vehicle that has a manual handbrake.

The new Volkswagen Polo offers a sound alternative in a competitive segment; the Polo’s track record for reliability and high comfort levels will reassure many potential buyers.

In many ways, it is better than the previous model with more space in the cabin and more technology. There’s also more safety and higher comfort levels.

However, the handling has also been boosted and there’s a nice balance between the handling characteristics and the ride itself. The greater levels of refinement help deliver a great all-round supermini.

The order books for the new Volkswagen Polo have opened now with the entry level model costing £13,855.