When Mr. John wrote that song in 1972 he must have known it would take a helluvalong time for the Rocketman to arrive. It wasn’t until 39 years later, in 2011, that Mini presented the concept model.

That was at the Geneva Motor Show and at the time everyone expected the company was planning to actually produce it en masse. Until in early 2012 they slapped the door in everyone’s faces and said they’d keep it a concept.

Stupid buggers! That little Rocketman would’ve been a true heir to the British Motor Company Mini heritage. At least size-wise. Technically it was a little more sophisticated than the original tin-can-death-trap-on-wheels that nonetheless has the charisma of a dancing banana: it just makes everybody smile! The Rocketman has that very same character, with its wide open clown’s mouth and cheeky eyes.

The Rocketman is a three-door hatchback, not much smaller than the original Mini produced from 1959. It has a couple of slick features, like a Union Jack etched in the glass panoramic roof and kick-ass cantilevered doors. Mini stated the concept had a carbon space frame construction, which means as much as that the metal in a normal car’s chassis is replaced by carbon fibre composite material. Nothing that hasn’t been done before, but quite kinky for a small car like that and very helpful towards keeping its mass down. As a result it was said the concept would drink only one imperial gallon every 94 miles. That’s better than a Polo Bluemotion coffee grinder!

Pity the car will never actually be sold. Or will it?!

Mini has seen fit to present a freshed-up edition of the Rocketman and the fact that apparently they’re not yet done with it leaves room for hope and anticipation. Technically the refresh is completely the same to the original, but they have sprayed in a nifty colour scheme: red, white and dark blue, i.e. Union Jack colours. Moreover, they’ve fitted some 18-inch rims with white and red accents to complement its new outfit. I’ll tell you: it’s a beautiful little car, despite that they haven’t painted it with red-white-blue stripes and a big roaring orange lion on the roof!

The question is, will Elton John eventually be right or will Mini forever stick to its initial decision and deprive humanity of the Rocketman? Would they really be so cruel? 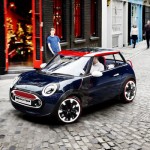 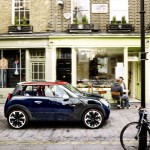 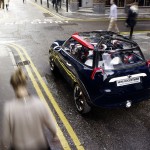 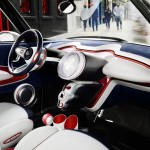