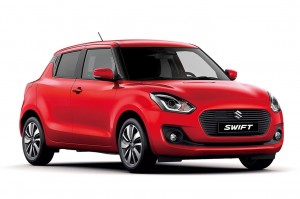 The all-new Suzuki Swift will go on sale from June 2017.

This is the all-new Suzuki Swift which goes on sale from June.

New owners will find the model is 10% lighter than the Swift it replaces and it’s also 19% more powerful.

It helps to that the car is 8% more fuel efficient though it’s only available only as a five-door model.

The Suzuki Swift will return 66 mpg

Under the bonnet, the Suzuki Swift will return 66 mpg and is powered by a four cylinder 1.2 litre Dualjet engine that produces 90 BHP with emissions of 98g/km.

That economy figure is for the Swift fitted with the manual transmission and there’s also a useful three cylinder 1.0 litre turbocharged ‘Boosterjet’ engine producing 111 bhp which will return 61 mpg with emissions of 104g/km.

Suzuki Swift has been a worldwide sales success 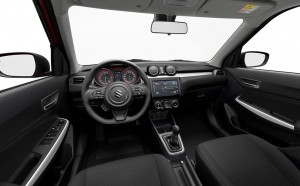 The Suzuki Swift has been a worldwide sales success for the firm since its launch in 2005 with 5.4 million units sold.

In that time, the Swift has found 127,000 owners in the UK and it has sold more than 1 million Swifts in Europe.

The latest model was launched in Japan late last year to great acclaim and the all-new global supermini was unveiled at the Geneva motor show.

However, the model for Europe has been designed and manufactured with the continent’s drivers in mind.

This means the Suzuki Swift is an agile and nimble car to drive with a functional and sporty interior.

The new model is launching into a competitive segment, but Suzuki is adding a range of useful technology and equipment to ensure it’s a safe and enjoyable car to drive.

Among the features for the Suzuki Swift is a forward detection system as well as autonomous emergency braking, and lane departure warning.

The Suzuki Swift being unveiled at the Geneva Motor Show: