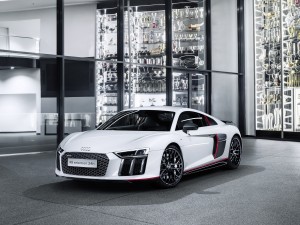 It will be the fastest car they have ever launched and the Audi R8 V10 will be a very special, special edition with just 24 versions being built.

Among the special features are extra equipment, a new interior, exclusive paint finish and Audi’s laser lighting is fitted as standard.

Around half of the Audi R8 V10 Plus Selection 24H will consist of the same components as the racing car which won the Nurburgring 24 Hours on its debut last year. The R8 has notched up 323 race wins since its launch in 2009.

Owners of the new vehicle will have magnetic ride adaptive damping, dynamic steering and a sports exhaust to help blast the R8’s 10-cylinder soundtrack to a wider audience. The unique paint finish will replicate the same one found on the R8 LMS.

The car is built mainly from aluminium and carbon fibre with the latter material being used for its side blades, mirror housings, rear wing and diffuser, front spoiler and the engine compartment cover.

The Audi R8’s cockpit mirrors that of the racing car 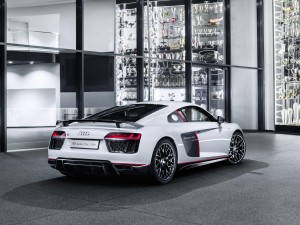 The Audi R8 V10 Plus Selection 24H will impress

Inside, the Audi R8’s cockpit mirrors that of the racing car with full leather upholstery and trim. There’s also illuminated door sills which will feature the car’s limited edition number, and the logo ‘R8 24h’ features around the cabin, most strikingly on the inlays.

The Audi R8 V10 Plus Selection 24H also features a new quattro drive distribution set-up so the power can be delivered to both sets of wheels with the suspension designed to cope with high downforce and aerodynamics.

Indeed, Audi developed the new R8 alongside its GT3 racing car, the R8 LMS, with near identical V10 engines being fitted to both.

Audi are keeping tight lipped about whether the R8 V10 Plus Selection 24H will be available to UK drivers but when it goes on sale in Germany it will cost from £180,000.