The electric car seems to be the world’s hope for a continued existence of such beautiful species as the glow worm, the garlic toad and several types of ferns. Indeed, combustion engine powered vehicles are Satan’s work and CO2 is the product of his rumbling intestines.

And that’s why many automotive manufacturers globally have set out to develop clean, green driving machines for which electricity is an often picked form of propulsion. (In reality it’s not their sense of responsibility at work, but the fact that governments globally are stimulating cleaner cars, combined with the fact that consumers are finally ready to give up fuel that burns because of ever-rising prices. In short, it’s about money. But let’s not say that out loud, OK?) General Motors is one such carmaker and it has developed one of the most promising alternatives to date.

Why is this so? Because GM, for its Chevy/Holden Volt and Vauxhall/Opel Ampera models, opted to not go for a completely electric alternative. As such, it eliminates the problem that fully electric cars have: that of limited range. The news last week was that GM has now made some further improvements in that area.

With its nearly 200 kilos of batteries fully charged, a Volt or Ampera will now drive about forty miles without requiring its 1.4 litre gasoline engine to kick in to recharge the pack. That’s about three miles more than before, which GM achieved by optimising the mixture of the battery fluids. Forty miles may not sound like much, but it’s more than sufficient for most people to get to work every morning.

According to official European tests, the car will do about 1.2 litres of fuel every 100 kilometres. That’s all fine and dandy, but of course only a valid measure for a very particular usage of the car, that includes both electric and gasoline powered driving. One engineer at Opel put it more realistic: 169 Wh per km – about three times more than using a 60 Watt light bulb for one hour – when running only on batteries and 5 litres per 100 kilometres when the engine’s on. In that respect it’s nothing better than any low-consumption combustion car, so the key is to stick to short distances.

And that’s exactly why there’s still a problem if you want to be absolutely clean with your Volt or Ampera: it takes nearly eleven hours to fully charge the battery using a normal socket. So even if you plug it in immediately after you arrive at the office, you’re still going to be making a long day.

Be careful when your boss offers you one as a corporate car: his motives could be something else than the wellbeing of the yellow wagtail! 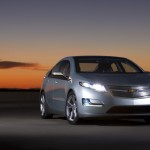 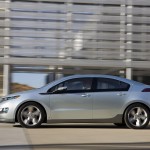 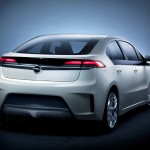