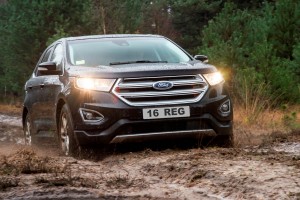 The all-new Ford Edge is coming

It’s been a long time in coming, but the new Ford Edge will be going on sale in the UK with prices starting at less than £30,000.

The new SUV is a flagship for the Blue Oval and will sit alongside the firm’s excellent Kuga and Ecosport.

The real attraction for the SUV line-up from Ford is that they give better value while having more space and equipment than their premium rivals, such as the Audi Q5.

Ford Edge is based on the Mondeo platform

The Ford Edge is based on the Mondeo platform and the entry level model comes with a 2.0 litre TDCI diesel unit which produces 178 bhp with a six speed manual gearbox and the Zetec trim.

To illustrate how well equipped the cars will be, the Edge comes with active noise cancellation, 19 inch alloys, privacy glass, all-wheel drive as standard, heated and cooled front seats as well as a touchscreen that features a DAB radio.

Also, Ford is keen to pack its cars with lots of technology and this one also features inflatable rear seat belts, pre-collision assist, adaptive steering and cameras that can detect hazards at speeds of up to 100 mph.

Engine choice for the Ford Edge

The only other engine choice for the Ford Edge is 2.0 litre twin turbo diesel unit that produces 208 bhp and has a six speed automatic gearbox.

There’s a lot of space on board the Ford Edge, much more than its SUV rivals, and its equal to its larger counterparts.

Considering the size and weight of the Ford Edge, drivers should see decent fuel economy of around 49mpg with emissions of 149g/km.

The Edge has been on sale in the US for some time now and has done very well for the carmaker and hopes are high that it will be as successful in the UK.

The new model is part of the firm’s strategy to offer one vehicle around the world and, Ford reassures us, there have been tweaks to ensure that European drivers get a car that meets their demands.