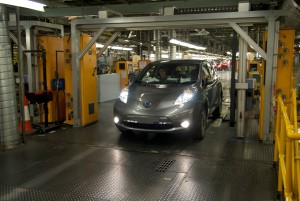 The Nissan Leaf has sold 200,000 versions around the world to be a successful all-electric car

In the five years since its launch, the Nissan Leaf has proved to be a sales success with 200,000 buyers enjoying its charms.

And to celebrate the Leaf’s birthday, Nissan has announced that there’s a new powerpack to help boost the car’s range.

The British-built Nissan Leaf is an excellent all-electric vehicle and one which has helped to transform the public’s perception of how effective these cars can be and how cheap they can be to run.

Nissan is still the world’s leader in producing electric vehicles and, apparently, Leaf owners have now racked up 1.2 billion miles of travel since its launch. That equates to 2,600 trips between the Earth and the Moon.

The Nissan Leaf has prevented 330,000 tonnes of carbon dioxide

However, it also means that the Nissan Leaf has prevented 330,000 tonnes of carbon dioxide entering the atmosphere.

The Leaf’s sales landmark will be achieved in January, when Nissan delivers its 200,000th vehicle with American buyers leading the way with 90,000 sales so far.

Japanese buyers have bought 50,000 cars while European buyers snapped up 40,000.

However, Nissan is not resting on its laurels and last month buyers in America got the chance to enjoy the 2016 Nissan Leaf model with a new 30kWh battery.

The new pack will extend the range of the vehicle by 20% and will be available for British buyers in January.

Nissan has also announced another ambitious project which enables an electric car to become a home energy hub.

This means that vehicles will be able to harness and store renewable energy produced by the car. It can also return unused electricity back to the grid – the carmaker is to start its ‘Smart Grid’ trial shortly.