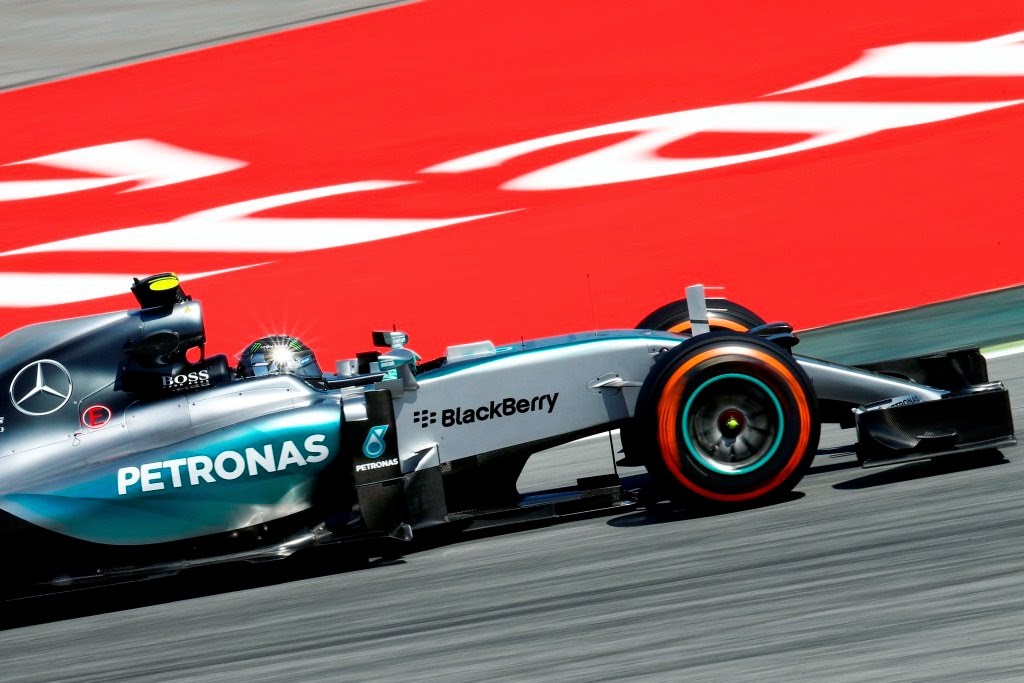 Nico Rosberg puts it on pole for the first time this season at the Spanish Grand Prix. Image courtesy of Mercedes AMG Petronas

The fifth race of the season and we’re in Europe for the first time for the F1 race season. Circuit de Catalunya near Barcelona is a demanding track for every aspect of the car, and as before, tyre wear, with hard and medium Pirellis to choose from, will be critical.

Qualifying 1 at the Spanish Grand Prix

Unsurprising dropouts in ascending race order of the two Marussias and Force India, who with budget constraints have had no updates so far this season, with Ericcson in the Sauber just out of Q2 in 16.

But the good news, or surprise, is that McLaren put both cars into Q2 for the first time this season. Both Mercedes cars and Vettel in the Ferrari were the only runners not to use the faster Medium tyres, which might give them an advantage for the race with a fresh set of the softer ‘option’ tyres available for a potential 2-stop strategy.

Qualifying 2 at the Spanish Grand Prix

The usual suspects, to some extent, only managed to get this far: Both Lotus cars lead Alonso and Button, with Felipe Nasr 15th. Toro Rosso did well to reach Q3 with both drivers, with Max Verstappen again shining, reaching P7, albeit using 3 sets of Medium tyres to get here. Significantly, both were ahead of the ‘grown up’ Red Bull team who came in at P9 and P10.

Qualifying 3 at the Spanish Grand Prix

Mercedes looked mighty, with only the Ferraris really challenging, albeit a good showing from Massa in Q2 to split the Ferraris, and it was good to see Raikkonen outpacing his team mate in Q1 and Q2, albeit only on faster rubber in Q1. Nico Rosberg got the upper hand on Hamilton to take fastest time in Q1 and Q2 – but it all comes down to the last qualifying period.

Rosberg had the edge, with a blistering early lap to put it on pole ahead of Hamilton. Vettel made 3rd, ahead of Bottas with Carols Sainz sure to please the hone crowd with a 5th place. Verstappen beat Raikkonen to 6th, with the Red Bull of Kvyat edging between his team-mate Ricciardo in 10th and a disappointing last run for Massa in 9th, to get 7th place.

This is the first time Rosberg has had a pole this year, with Hamilton just not having enough in an answer to his pace, but Vettel was close on their heels, albeit in the end almost a second off the pole sitter’s pace. Mercedes seem to have responded to Feaari’s development pressure and found something extra in their cars. 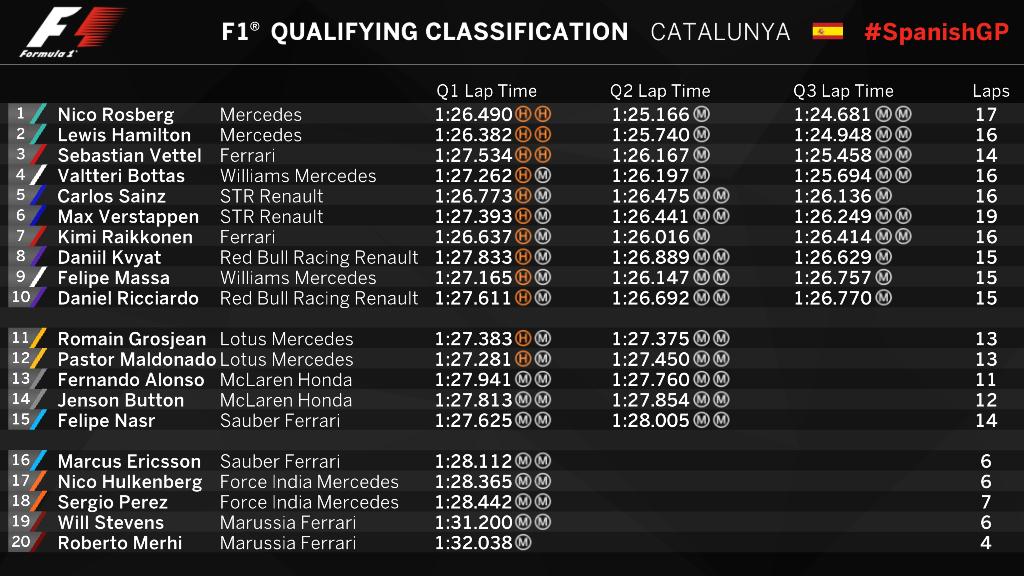 Prediction for the 2015 Spanish Grand Prix

To me, I think the tyre wear issue will favour Ferrari with the temperatures forecast for tomorrow, so I predict, with good strategy and perhaps a bit of luck surrounding the timing of any safety car, that Vettel will win ahead of Hamilton and then Rosberg. The Ferrari race pace in practice showed that they can compete, and they were fast in race simulations – plus he has that extra set of fresh option tyres which he should be able to make last longer. It will be close.

Who do you think will get to the podium? As with every Grand Prix, you can enter our FVL F1 Podium Competition be entering your prediction below. Enter at least an hour before the race starts tomorrow. Visca Catalunya and good luck!