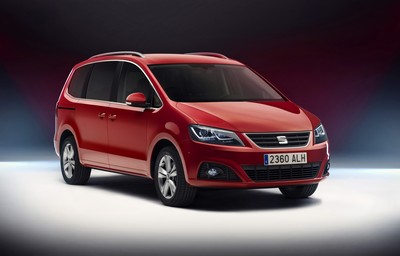 The new Seat Alhambra has been unveiled and it’s an impressive all-round people carrier with a new generation of infotainment and safety systems.

In addition, there’s a batch of new TSI and TDI engines which will use up to 15% less fuel than the current models.

The new Alhambra is part of Seat’s push to revamp its range for a new generation of customers and there have been some interesting innovations.

It’s available to pre-order from the end of May and deliveries will start in the summer.

Among the improvements is a range of redeveloped engines which meet the strict Euro6 emissions standards.

New engines for the Seat Alhambra

Among the new engines is a 2.0litre TDI unit which produces 150 PS and which should return around 58mpg while having CO2 emissions of 130g/km.

The same engine also has a power output option of 184 PS and a new 1.4 TSI petrol unit will deliver 150 PS.

All of the engines can be coupled to the firm’s DSG dual clutch auto transmission which has a coasting function to save fuel – whenever the driver lifts their foot from the accelerator, the Alhambra will run with its engine decoupled.

The Seat Alhambra also has the next generation of infotainment systems which include a high-res touchscreen and better levels of connectivity.

Among the standard equipment for the new model is a multi-collision brake system which will see the vehicle automatically brake if the driver cannot intervene after an accident to avoid a secondary collision.

There’s also a blind spot sensor which detects vehicles when changing lanes and a dynamic chassis control system which will change the Alhambra’s characteristics depending on the driving situation.

This means that the occupants will either enjoy a more comfortable or sportier drive – though with the new massage seats long journeys will be something to look forward to.

There are been several exterior design tweaks including a new LED rear light cluster, a new Seat brand logo in the grille and new wheel designs.

Some good ideas have also been brought over from the Seat Leon, including its steering wheel and some control elements, and there’s also a new keyless entry and start system on the Seat Alhambra.