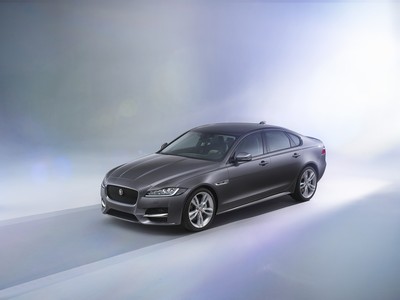 This is the all-new Jaguar XF which will not only turn heads but also impress drivers and fans of the marque alike.

That’s because the new car is packed with technology, is more efficient and lighter – the firm says it has unrivalled dynamics and refinement for its segment.

Not only is it lighter than its competitors, the Jaguar XF also has the lowest CO2 emissions of any non-hybrid competitor of just 104g/km.

That’s quite an impressive figure but the impressive new car also delivers fuel economy of 72 mpg.

Equipment and style for the new Jaguar XF

Jaguar have also added the option of a new manual gearbox and there’s also a new 10.2 inch touchscreen infotainment system on board.

Drivers of the Jaguar XF will also get to enjoy a smooth drive on snow and ice thanks to its ‘all surface progress control’ system – the carmaker says that all the driver has to do is steer!

Jaguar XF will be a popular business car

The new Jaguar XF will undoubtedly have a big impact on the business car segment and the interior is a blend of luxury finishes and materials along with the firm’s traditional craftsmanship.

There’s also a 12.3inch TFT instrument cluster board that has been reconfigured and an impressive infotainment system that has 17 speakers and digital surround sound.

Other touches to help set the car apart from its competitors are rotating air vents, a rotary shift control and phosphor blue ambient lighting for the cabin.

The Jaguar XF range will be made up of the following models – the R-Sport, the S, the Portfolio and the Prestige.

Under the bonnet, alongside the 3.0 litre V6 already mentioned, will be a new 2.0 litre diesel powertrain with a choice of 163PS or 180PS, available in automatic and manual transmissions, and there’s also a 3.0 litre V6 diesel unit which will produce 300PS and is available with an automatic gearbox.